I have a 11 weeks cinnamon conure, got him at 7 weeks and have noticed since the start that he’s really good at holding his poop. I’m not encouraging this behaviour.

Recently he’s been unwilling to poop in his cage, possibly for cleaniness reasons, he would wait until he comes out and does a big pile. The morning poop has been big since day 1 he’s home, but during the day he started holding as well. My husband works from home but there’s still about 2-3 hours in between when he’s in the cage and we can’t let him out during work.

I’m just worried, this voluntary holding of the poop, would it endanger his health? And if he has to be in the cage for extended periods of time say 4-5 hours, is there any ways to encourage him to poop in? I think he just doesn’t want to dirty his regular areas, like he never poops on his favourite shelf and fav stand.

i did notice however when he’s outdoors the poops are much more frequent. And he only tends to hold the giant poops are mostly after formula (he still takes morning and night feedings 2-4ml each time). During the day he has pellets and veggies and he would go every day 20min after food with the regular small droppings . It’s strange because his formula poop smells but pellet poop doesn’t. He’s on masuri formula. Wonder if he’s just concerned about the smell. 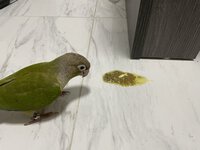 Curious how big his cage is, any chance of a pic?
The huge morning bomb is pretty normal for many birds but I’ve only heard of a few people having the problem where the bird sees the cage as a totally poop free zone and I’m not sure how they worked around that.
Hopefully someone with some answers will be along to offer some help soon.

Shezbug said:
Curious how big his cage is, any chance of a pic?
Click to expand...

That’s his cage, quite small as compared to a lot of others but this is the biggest that would fit in our small flat.

we are getting a bigger flat at the end of the year and he’s definitely getting an upgrade.

his set routine is:
7am out for a poop and flying training (on leash) outdoors for an hour
8am he gets formula and spends time outside while I prep for work
9am I leave and he is in the cage until 1-2pm when I return. He’s out all the time when I’m home
And around 5pm we go for another round of walks + flight training and then it’s back home to formula and to bed.

i also have a stand at home where I actively try to get him to poop, he gets treats for pooping on the stand.

For a baby, especially with a smaller cage, the cage becomes the nest. They learn to not poop in the nest to keep it clean. My green cheek even did this when she came home at 10 months old, and it continued for several months. She did eventually learn to poop in the cage during the day but at night she would still hold it and do a morning bomb.

The biggest concern with holding it is they can develop bacterial infections.

Mizzely said:
For a baby, especially with a smaller cage, the cage becomes the nest. They learn to not poop in the nest to keep it clean.
Click to expand...

he freely roams as long as we are home and when he’s out I have no worry about him holding. The cage will be upsized but definitely not now, we do try to provide the best for him within our limits. Now he gets about 3-4 hrs of outdoor and leashed flight training on top of being free range around the flat so the cage is really more of his sleeping quarters, can understand that he wants it to be clean.
You must log in or register to reply here.