Our Little Ones Have Arrived

Our 2 baby girl caiques just arrived this morning and we're overjoyed to have them! However, we have a few questions and are hoping people here have had experience and can give us some guidance. They just arrived this morning and are not fully weaned. We have the syringes and formula but they seem tired/shocked after their journey on the airplane. When should we try to feed them? They're resting comfortable together. Also, when should we move them to their cage? We have a large beautifully stocked cage with toys, ladders, etc for them but aren't sure when they should get moved in on a full time basis.

Any other general advice would be very much appreciated. Thank you!!

@Laurie you are the best person I know to answer these questions.

Keep them in a warm dark humid place
Feed them when their crops are empty.
Feeding baby birds is a technical skill. Not for beginners
Temperature is critical
Food consistency is critical

Sorry I did not see this until now. I have had a very busy week

How are the babies doing? How old are they?

They're doing great! They love snuggling and playing around on the floor. They've begun to test out the ladders we got for them, but they're still a little unsure of their feet. From the information we were given, they hatched around May 25th. The bigger one has begun showing some interest in nonformula food (she had a couple nibbles of an apple last night). They're growing quick!!

Photos are an absolute must! (Please)

Parrots are a life commitment and God's gift to us all! 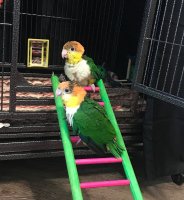 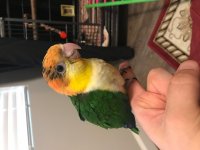 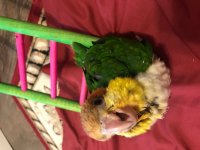 They are cute!!!! At 8 weeks I guess they should be eating some solid food. Would think maybe lucky for them that they are not too vulnerable on the temp of food. I would suppose even warm cereals like oatmeal could be given...Not sure so the cakies feel free to advise.

Not really good for a breeder to let babies go before they are fully weaned & I hope these ladies don;t have any problems because of it

They are beautiful. Congrats.

They are so adorable

UPDATE-- Kiko and Mango went to the vet last night (for their routine physical- no causes for concern), and we are happy to report they are as healthy as can be. Everything is normal and they are quickly learning flying, eating, climbing, etc. We did, however, learn some very saddening news. Our babies are significantly younger than we were told and that basically everything we were told by our breeder was a lie/incorrect. We were told by the breeder that they hatched ~May 25th, but the vet doesn't think they hatched until later into the first week of June, meaning that they were between 5-7 weeks old when they were shipped, not to mention, unweaned. Our hearts broke as we found this out because we both realized how lucky they were to have survived the trip. As we got closer to having the birds shipped (from Miami to NC), we found out that our birds may not have been receiving the level of care they needed, and thus we decided to have them shipped under the impression that they were a couple weeks older than they actually were. We believed they were going to be better taken care of by us than the breeder's "friend."

We're at a loss about what to do about the breeder because the website only gives 250 characters to review the breeder, and what happened with our babies should not happen to anyone else. I feel the need to do something so that someone else does not have their hearts broken, but I don't know what to do. If anyone has any suggestions, they would be greatly appreciated. FYI, we found the breeder on BirdsNow.com

PS- Mango and Kiko are receiving lots of love and care through their development as they grow. Here they are practicing their eating! 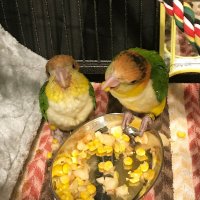 The one on the left looks like he/she is thinking: "Hehe I pooped on your towel. Good luck cleaning that"
Last edited: 8/3/18

Oh gosh. I got Capt Jack over by Miami. Would you mind to pm me the breeder's name?

finchly said:
Oh gosh. I got Capt Jack over by Miami. Would you mind to pm me the breeder's name?
Click to expand...

We got them from Humberto Jaen

That isn't my breeder. Thanks.

Wonderful picture... please keep us updated! Love photos!
You must log in or register to reply here.