One of my new parrotlets is exhibiting the most bizarre behavior, .. the breeder feels like he is overwhelmed with the move and the commotion of my house and four dogs running around and to just let them be for a while in a non stressful environment with plenty of food and water and warmth till he becomes less stressed and more comfortable. They were very active the first few days, came out but it was too much I think as we had to resort to a little chasing to get them back in which is when he started acting this way.. I regret that now ..and that is a whole different conversation on best way to get them good with coming out for out of cage time and going back in. Has been a VERY long time since I had to tame a bird and I don't remember it being this crazy but anyway..trying trying. At any rate, one of them gets super tired and withdrawn and almost weak acting in the evening. then wakes up .Eats and drinks like a pig then acts normal all day and it starts all over again. We have kept them in a quiet place since this started with either my husband or myself in the room so not completely alone working on the computer, talking to them, playing music, offering random treats etc.. but keeping dogs OUT of the room to let them acclimate to new home, Breeder suggested the first night this happened he may be overwhelmed and stressed and get him warm quiet and lots of food and water. We did and he was back to normal in the morning. .. that evening he kinda acted the same low mode again, we were sure he was sick.. it was middle of the night friday and certain he was about to die. Woke up the next morning and he ate like a pig and was NORMAL. Being that it was holiday and avian vet not open at all anywhere we stayed in contact with breeder who insisted he is probably having a difficult time with the transition and to just take it slow,.. warmth, food water etc. .. so the next two days that is what we did and he seemed fine. Last night we noticed he was seeming sluggish again.. Turned the heat back up, he woke up early and when my husband went to check on him he was on the ground looking for food so he went to open the cage to make sure there was food incase he was weak but he was actually instead we think trying to get to my husband as he magically stepped on his hand and came out and snuggled up to him for an hour.. He needed to get dressed to go to work so put him back in the cage and he slept more, gave him food this morning and boom back to full energy and walking around normal.. what is going on here?? Is he just overwhelmed and stressed? Is he really only eating alot in the morning and just tired in the afternoon from stress and then after sleeping and filling back up?Is this normal weird behavior for a bird that is acclimating? .. breeder thinks he is overwhelmed and stressed out and to give him a little time and go slow and that me putting him back in the car this stressed out to a vet for two hours would do more harm than good right now, We live in a small town far from avian specialist. he gets his energy in the morning after sleeping and eating big breakfast but then the stresses of the day and noises of new place are making him act quiet and odd. .. Our other parrotlet seems to be just fine with whatever is going on and acclimating nicely ?? The stressed one is still perching, sleeping on one foot, occasionally chirping, I've actually seen him do the wiggle nest thing when he sees me come in the room. .. NEITHER of them are too interested in much exploring or playing with anything yet. Thoughts?
Last edited: 1/4/23

How old are they ? They are about 6 months old. .. They both just got up and ran around and ate and drank and sang a little and its the witching hour again and He is back to being perched and tired looking and a little fluffed.

Welcome! Stick a picture in of your new ones.

I'd get the veterinarian appointment myself.


I'm confused Is the parrotlet being hand feed or is he already weaned? I think the breeder is giving you the same answer because he might not know better. I would take him to the vet since he's been acting sluggish.
Banana

They are weened.. I honestly think he is just not adapting well and has been very stressed.. , but right now he's up on his perch, just ate a whole lot of food and drank, hopped around the cage and talking and chirping. so maybe we are on the mend from the new environment fear!? he's still a little fluffy relative to his friend. I have finally separated them and set them up in a cage next to each other and interestingly enough they got a bit more chatty, hungry and moving around.. so hopefully everyone is now acclimating and happy to have their own space but be able to see and chatter and eat together without biting toes. attaching one from earlier.. they have been huddled together for days... but knowing they can turn on each other and wanting to watch who is eating what etc we set these two cages together tonight.. we have two flight cages too that I will be putting them in when everyone gets a little happier with the situation. But right now I have some music playing and it is the first time in DAYS I've heard them both chattering. Is it normal for them to fluff up when napping?

Birds nap with their head tucked in their wing: 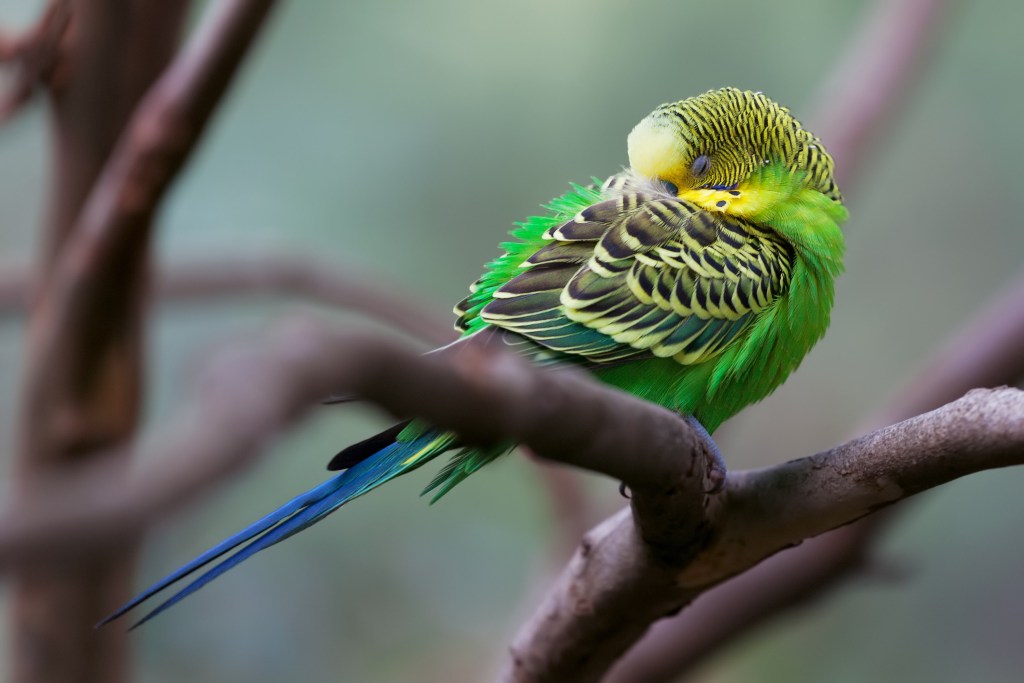 I imagine your bird is just trying to keep warm or relax.

From your description of them I personally would be booking an avian vet appointment sooner rather than later for their new bird wellness checks.

I love parrotlets just something about them

I personally would go to vets just for a check up
How are they doing now ? In separate cages
You must log in or register to reply here.