Hello all! I've been the primary caretaker of our three box turtles since we first got our Rose going on 6 years ago. We added Ross two years ago after finding her in the middle of a dirt road almost dead. We recently adopted our third turtle, Houdini, in late April, early May this year. Rose and Ross have both successfully hibernated before. Houdini we were unsure if he would. We recently had a bad cold snap and Ross and Houdini have begun hibernating. Rose is still hungry and shows no signs of wanting to hibernate yet. My concern is that if Ross and Houdini hibernate now, they will most likely hibernate for longer than four, even five months. It's 80 degrees out right now, so I thought they would come out, they have not. I know where they are, but am unsure of whether or not I should unbury them and wake them up to keep putting weight on them? I was concerned about Houdini after the cold snap, I was planning on keeping him indoors this year, bringing him in after Rose went under for the season. What do you guys think? 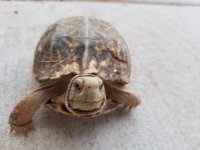 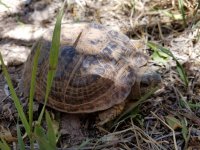 The two pictured are Ross and Rose. We found Ross with a really messed up shell, it has improved since we first rescued her.

Awwwwww soooooo cute I looove Turtles
You must log in or register to reply here.