My Goffins barbers her feathers. She’s had blood work done and several vet visits, and it’s a confirmed behavioral issue. I work from home and have a caique that putters around (she doesn’t like the caique too much but tolerates him). She’s got her own room and lots of time out of her cage but it doesn’t seem like enough for her. Are Goffins generally happier with a same species friend? 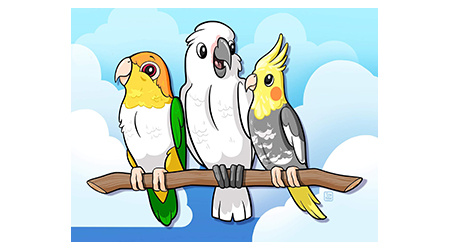 Disclaimer: I live with budgies, not cockatoos. But I think that if this 'too is imprinted on people, which is likely given the barbering in the absence of medical issues, it may or may not work.

Nevertheless, @JLcribber has two cockatoos & I personally think his have such fine feathers in part due to having a conspecific friend. But what if yours fight?

Sorry you & your bird are going through this.
In His hand is the soul of every living thing. -Job 12:10

Our goffins girls aren't close friends, had some rough patches in the beginning, but now after 4 years together (this month!) they are fairly tolerant of one another!

It really only took a year or two to get mostly where they are now, though they are always improving, albeit slowly. Occasionally one will even preen the other's head for many, many... seconds.

It may not sound like much but they have mirrored one another since their first introduction & Puffin calls for Bug when she's out of sight. I do think it has helped them a lot having each other. So in our case it's been a huge success since our reason for getting Puffin was so Luv Bug would have someone like her to keep her company while we're at work.

Thank you all for the thoughtful replies. It seems like if we do get her a conspecific friend, it may make her happier long term but may not be easy. Plenty to think about!
You must log in or register to reply here.