Shezbug said:
If you weighed the bar in its package then it will weigh more. They give you the weights of the food without the packages usually.

My scales are playing up again. I’m tired of buying overpriced scales that are rubbish from the moment you get them
Click to expand...

Hmmm, I didn't even think about the packaging weighing anything because it's just a little plastic like wrapper but you are probably right. I'll open one tomorrow and weigh just the wrapper and then just the nutrigrain bar alone to see what it says. Thanks for thinking of that.

I was afraid to buy an expensive scale for the very reason you mentioned. I also noticed the scale I just bought gives you an option of buying automatically again as a subscription, which I thought was odd because Amazon doesn't usually recommend that unless it's food or a personal item like shampoo, toothpaste etc. It made me wonder if this one will break quickly.

I think that extra 7 gram weight gain scare might have been a mistake because at our most recent vet visit they said he weighed 111 grams which lines up with what our scale said the night before the vet visit. His belly still looks big which concerns me a bit but hopefully it's just a little fat, like the vet said. We will cut down on nuts and treats and see how it goes.

I also weighed him after our vet visit with my old scale to calibrate it with our vet's scale but he ate alot after the vet visit so the food might have skewed things a bit but our old scale at home was only 1 gram off from the vet's scale.

I got my new scale from Amazon the other day but had to go the store to buy a battery so I just tested it yesterday and now I'm not sure if I should keep it or return it. I'm even more confused on whether the new scale or my old scale is more accurate.

I weighed the nature valley bar on both. Sometimes they both say 45 grams sometimes one of them deviates one to two grams.

The one thing I don't like about the new scale is that it constantly bounces around the number from 44 to 45. 44.5- 45. It doesn't really settle and stop on a number for quite some time. My old scale weighs and then stops. Sometimes both scales say it weighs 47 or 48 grams. Makes no sense. 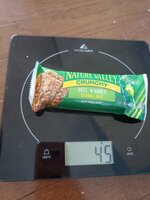 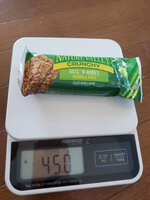 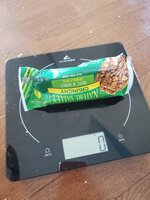 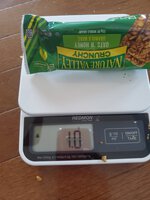 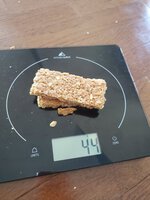 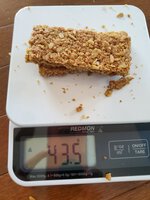 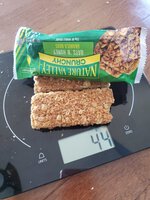 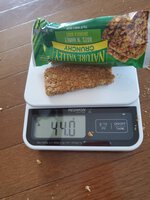 I think if it takes a long time to settle on a weight, I would return it and get a different one. If Blu is like my birds, I have a hard time getting them to stand still for very long.

sunnysmom said:
I think if it takes a long time to settle on a weight, I would return it and get a different one. If Blu is like my birds, I have a hard time getting them to stand still for very long.
Click to expand...

Very good point, thank you. I think I will end up returning it because with my old scale, I just put Blu's regularly table top perch on top of it and he sits very nicely on it. The new perch has a cheap perch that I haven't tried yet but I figure our old scale/perch works good enough for me. Especially considering that neither one seems to be 100% accurate.

I thought I would update this post to tell everyone that Blu's physique is pretty much back to normal now. I really do have a feeling something about all of those meds he was on caused some swelling because we stopped all the meds like 4-6 weeks ago and didn't really change his diet and he looks normal again. That's just my feeling about it. I can't say for sure that's what happened but that would be my guess.
You must log in or register to reply here.