Hello avian avenue community, long time no see!
i thought I’d pop back on here to wish you all a merry Christmas, happy new year and share some pics of my wonderful experience at auckland zoo this December!

my sister and I flew to Auckland for a few days holiday time and of course we visited the zoo which turned out to be a lot more of an experience than I thought!

I don’t know how many of you have been there but they have a wonderful Australian birds exhibit with two aviaries, one for smaller birds such as lorries and finches, and another for red tailed black cockatoos. upon entering the second aviary I saw a large crowd of people gathered around one of the toos who was perched on the roof above the entrance, posing for photos but shying away if anyone came too close.

I too took a few photos, but I wanted to get closer so I started talking to him, and offering him bits of sticks, which seemed to interest him as he slowly strolled towards me.
although it turned out he didn’t want the sticks. he began to ignore everyone else because he realised, “oh, she’s a bird person, I like her“.

Now I’m not very familiar with larger species, especially toos, but I decided to try something anyway - and so I backed away from him and patted the small fence dividing visitors from the rest of his habitat and, to my amazement, he flew down and landed right in front of me. Of course everyoneelse in the aviary began closing in for photos and that must have spooked him because next thing I knew, he was on my head! I stood there for a while with him sitting there preening, as he obviously felt safe enough for people to take photos, although he did mess with my hair a little, lol.
I put my arm up for him to jump onto and he did, perfectly. Now a lady taking photos stopped and asked to hold him and I said sure, he’s not my bird, showed her how to hold her arm out for him and he tried to bite her oops. Guess he liked me. my auntie took a few photos (please excuse the terrible quality, they didn’t send in fully and I had to screenshot them.) I also discovered that he would mimic me if I shook my head and went “pspspsps”, though unfortunately I didn’t film that.
he got very sad when I had to leave and I definitely hope to go back up and visit sometime next year!
‘so I suppose I like cockatoos now!
(please excuse me using Male pronouns for the bird, as stated before I’m not very familiar with this species and don’t know the difference lol) 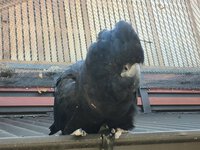 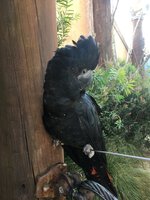 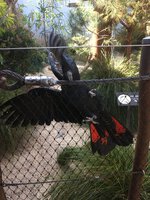 What a great experience! Adorable that he liked you so much.

That is indeed a "little" boy!!!! I can see some immature feathers on him still (the yellow speckles) as well as his tail feathers looking slightly immature-ish, too! His tail feathers should be 'solid red' in the red areas, but it looks like there's just a smidge of black markings left in his red areas.

Females look kind of like a stary night, black lines in their tail feathers, and the color goes from red to yellow. (red at bottom, yellow at top - in the same area that he's red in) Both are just absolutely stunning!!!!


What a cool and fun experience! Thanks for sharing! We don't have very many black cockatoos over here in the US!
MFids

Thanks for sharing your wonderful experience. He certainly is a Stunning Red Tailed Black Cockatoo . You're Country, down under has an amazing diversity of Flora and Fauna .

What a cool experience! Great photos too! Thanks for sharing

How wonderful. Such a great experience getting up close and personal with such a goergeous bird