HEY! Everybirdy there's a feast in the Crepe Myrtle this morning!!!

The wild Quakers were chowing down in the tree right out my front window this morning 6 or 8 of them. And a Woodpecker joined it along with a couple of Crows and there were even a pair of squirrels sharing in the feast. The dinning went on for well over an hour. I cracked open the window in Team Green's room and they started calling to the Quakers, who did NOT call back. I guess they were too busy stuffing their faces to bother.

BTW when you see a bright green bird in a cage remember in the wild it's almost imposable to "see" the green birdy in a green tree! Even from 20 foot away they blend in so well. If they didn't move I didn't "see" them. Now a black crow stands out as does a Woodpecker with a bright red head.

There is wild quakers in tampa?! Are they native to tampa or invasive? I am assuming it WOULD NOT be wise to catch them although tempting for me XD

The are wild Quakers, and Nanday Conures. I have seen both right out my window. I have also heard there are Love Birds and Macaws, but I haven't seen those. As how they came to be here, I have heard they got away (or were let loose) from one or more of the "Bird Mills" OR got away from Busch Gardens (I rather doubt that but you never know) as well got away from someone's home. BUT I have been told they have been here so long that they are now a breeding population. That I believe it as the the Quakers nest right down the road from me, about a block away.

A very poor photo I took of Quakers out my back door, I really need to buy a good camera as this was taken with a cell phone through a small telescope! 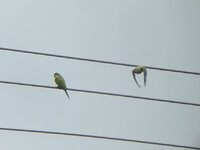 There are quaker populations in a lot of areas of the US. They're in New Orleans, Austin, New York, Chicago and a bunch of other cities. The communal nests help them survive winters much further north than most tropical species can handle. They're considered an invasive species, and forbidden as pets in quite a few states. That said, the original concern that they would damage crops hasn't panned out, and IMO, they're filling an ecological niche left by the Carolina parakeet. The only "nuisance" behavior they have is building those massive nests on electrical poles and towers, so the power company isn't a fan.

My own quaker came from one of these wild populations. He fell out of the nest as a bald little baby. Someone found him and took him to the local "bird lady" who raised him. I love seeing his wild cousins flying around town.

When they fly by DON'T blink! They are FAST and you'll miss them if you're not carful. We never really get to see just how fast most of our little ones are. Even if fully flighted they just don't have the room to really get going in a home.

would it be wise to attempt to catch one? I live just a few hours from tampa..

Bluberry said:
would it be wise to attempt to catch one? I live just a few hours from tampa..
Click to expand...

These are wild birds at this point with their own lives. It would be no different than going to South America to steal a macaw.

It is one thing to rescue a baby in distress. It is another thing entirely to take an animal out of the wild and cage it because it's "free".

When we were in Clearwater Beach in 2009. There was pretty good size flock of Quakers. The first night we were on the lani (sp?) eating dinner they flew in for drink from the pool. Yup they are super fast. Everybody went Disney World except me the next day. I sat on front steps with some unbuttered whole grain toast. They would come close but were pretty spooky too.
Not that night they were out and out bold face plate robbers. We huge salad for dinner. They peered over the roof and if you left your plate 15 to 20 seconds, they whip in snatch romaine lettuce, cucumbers, green olives and pieces of chicken. And beat feet for the roof in seconds with goodies. Everybody had to be reminded to take your plate with you even for few seconds.
Forever Rocky's

@Mizzely , I liked how you worded that post, it really gave me a proper perspective on how much of a wild bird they have become.

Sadly as they're considered an invasive species you can do as you want to them, even kill them and nothing will happen to you. They really do no harm like the Green Iguanas or Pythons do. And as was said they are filling the niche left when we wiped out the Carolina Parakeet.

Mark & Da Boyz said:
When they fly by DON'T blink! They are FAST and you'll miss them if you're not carful.
Click to expand...

Every day, flocks come swooping up and down my street. Usually making plenty of noise as they go. And yes, they´re so fast! It´s a joy to see them flying free. When there´s fruit on the palm trees in front, they will stop here to eat them. I´ve seen them bringing their young and feeding them there too. They nest on the beach in the palm trees, and in trees in parks. I see flocks of up to 30-40 quakers sometimes.

There was a study done on quakers to see what effects were on native species.

Were not found to aggressive to other species in mixed foraging flocks. Actually proved protection and alerts to predators.

They were not crop raiders.

They only take back was them using power lines for nest structures.

Florida probably had native Amazon as well. And there still are naturally migrate pairs ( DNA not escapee population)

I once got see quaker population in rockaway new York. In the snow! Such amazing parrots

Mark & Da Boyz said:
Sadly as they're considered an invasive species you can do as you want to them, even kill them and nothing will happen to you. They really do no harm like the Green Iguanas or Pythons do. And as was said they are filling the niche left when we wiped out the Carolina Parakeet.
Click to expand...

Is that really true? Birds have a lot of protections in Florida. To my knowledge, even nonnative nuisance birds require a permit to trap. Even when Florida Power & Light removes nests from powerlines/etc., they do not interact with the adult birds. Very little research has been done on their environmental impact (that I'm aware of).

Pixiebeak said:
There was a study done on quakers to see what effects were on native species.
Click to expand...

Oh, just saw this! Was this study specific to Florida? Or was it on different established populations in the US?

I'm not sure.
But another interesting feature of their nest is the use of antimicrobial plants and materials. Because the communal nature and year round use , the nest would easily become a cesspool. So they evolved away to control and limit pathogens build up. More studies need done on this ofcourse . But I think its fascinating

I think they might do housecleaning as well. From observation of my pets, they go along and toss a stool off perches and objects. And they kinda seem to latrine(?) I find stool concentrated in one pile away from favored perches, food, and sleep area. ..they aren't perfect about that, but there is always a big concentration that seems dilberat
You must log in or register to reply here.