Wow! such a beauty.

I would love to visit sweden... it looks beautiful. 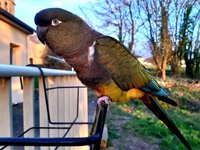 Still one of my favorites. I was given a pair late last summer by a local breeder who was moving cross country. They were beyond breeding age and had specific care requirements. It took me a while but I found a great home for them with a retired vet. I get reports on how they are doing once in a while and he adores them. The female is a love to him when he can get her away from the male. The male wants to kill him out of jealousy. I wish I had been able to spend more time with them, but I hope I'll be able to get one as a pet someday.
Indentured servant to one ungrateful cat and a flock of birds.

I hope you do! they really do make fantastic pets. She's still bonded to the whole family and so much fun to be around! mostly loud fun, but it's part of her charm. I don't know if I've said this before but she sings in an opera voice with me sometimes and imitates our laughter and the sound I make when she does something naughty. She'll mimick pinching me just a little too hard for ex. then look at me while making that noise and start squealing and laughing.

She has so much personality that it's impossible not to fall in love with her.

She's three years old so she's reached sexual maturity but hormones are not bad at all. She just gets more nippy, more hyper and isn't always in the mood to be petted. She'll let you as usual, get all puffy seemingly enjoying it and then pinch you 5seconds later, as if you've greatly offended her. She's never drawn blood and she has a forgiving, easy going nature. I feel like I better stop saying "she" actually because I think it might be a he. Some of the hormonal posturing, parading thing looks like it to me. Still not a one person bird anyway!

As I idealy would like all my parrots to have a same/similar species friend to bond with if they want to... I'm considering finding a friend for her in the future... she gets along with Saphira but they're not very close. I don't know if I could deal with twice the noise though! so i'm thinking of a blue crowned conure. Not sure yet but I'm under the impression it could be a good match for her... I won't be ready until next year anyway considering what i've been through with my pionus boys recently... so we'll see.

If you play this full volume, you'll see what she sounds like through the day when she's comunicating normaly. She's quieter at times using human sounds she caught up and a quieter kind of chirp but it's not her norm. She's louder (and way more insistent!) if alarmed, contact calling or very excited. Another strange thing about patagonian conures... expect them to answer you at any hour of the night!

Crazy Chiloé antics at 11 at night... i'm just reading in the living room next door, no television, noise or nothing to keep her awake. She's just so determined to join me that she's messing with the door and chatting rather than sleeping! Saphira sleep's just fine perched on a stand in the dark, like a normal parrot... but Chiloé has always been unique that way. She doesn't stop being active and talkative just because it's dark. Here is the cute voice she uses when not comunicating in her loud patagonian call.

I find her very expressive! that mumbling protesting growl she makes...

We went for a nice walk today. She looooves the kids, especially my daughter! although Chiloé's very much a family bird, she'll often choose Eileen over me. 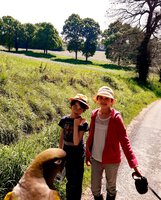 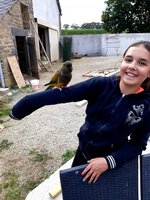 She's such a beauty! What gorgeous pics and how fun how watch her journey

@Ella.pi Patagonian conures are amazing birds! It is a shame that they have become so difficult to find.

They aren't hard to find in France yet, although not bred as much as other species of conures because of how noisy they can be. They make such great family birds.