Hello, my baby Fu (2 years 3 months old) is acting out of his usual behaviour since the last 2 days. He's a bit more aggressive. Usually he's a very energetic baby and he wouldn't let me out of his sight, however, since yesterday he had been closing his left eye a lot and would bite me whenever I try to take him out of the cage. He doesn't like flying a lot so we always sit together and play while everyone else flies. I coax him to fly a little everyday so his health is maintained. His sleeping posture is also fine, he sleeps on one feet. His poo is fine and he's eating and drinking well. He even sang a little today but then forgot the rest of the verse. However, when I took him out of the cage 2-3 times, his feet were cold which is unusual because his feet are mostly warm.

Background: Last year, Fu bonded with his mother Cheeko somehow and I was against it so I tried to keep them separate. However, they screamed too much for each other so I let them be in one cage but I took care that they never mate. However, recently I lost one of my baby and her bonded pair Fi started courting Cheeko and keeps following her everywhere and does not let Fu stay around her. And I saw today that Cheeko came to Fu but he kinda bit her to fly away. This is an unusual sight because the two of them preened each other yesterday.

In summary, he has been sleeping a bit more than usual and closes his left eye a lot and slowly both whenever he's in the cage. His feet are cold at times. His weight has decreased and his behaviour has changed from before towards being little more aggressive.

I wonder if he is sad about not being able to be around Cheeko. I am very concerned about him. Although he's eating and drinking well, I don't understand why his weight has decreased. I'll attach a photo of his poo just in case anybody can tell if it's normal or not. He's on mixed seed, pellets and vegetables diet. I gave him corn, spinach and black chickpea sprouts today at different intervals of the day. He had carrot, cilantro and mung bean sprouts yesterday.

I have planned on taking him to the vet tomorrow morning for sure.

Since I lost my first baby to egg binding, I have been very paranoid about their health and behavioural changes. Has anyone else seen a change in the behaviour in their tiels' like mine? 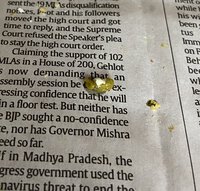 It could be related to the changing flock dynamic, but 10g is a big loss especially in a bird already on the small side. Good idea to get that vet check for sure.

enigma731 said:
It could be related to the changing flock dynamic, but 10g is a big loss especially in a bird already on the small side. Good idea to get that vet check for sure.
Click to expand...

Thank you for your reply.

I just checked again, he ate a lot of food in the last hour and went up to be 80g in weight. I'll still get him to the vet tomorrow just to be sure.

12 grams is a lot for a bird to gain in less that 24hrs, no matter how hungry. Do you trust those scales? Maybe a new battery?

enigma731 said:
Good idea to get that vet check for sure
Click to expand...

Ripshod said:
12 grams is a lot for a bird to gain in less that 24hrs, no matter how hungry. Do you trust those scales? Maybe a new battery?

It is kind of hard to get him to stand on the weighing device as he tries to climb on me instead of standing on it. He's sleeping now since it is night time here. I'll check his weight again tomorrow morning and definitely take him to the vet.
You must log in or register to reply here.