Celebirdy of the Month - September 2022 - Titan

Titan was transferred from Lollypop Farms in NY to the shelter I was volunteering at in NJ. The owners were macaw people, if you had a hard to handle/place macaw that’s where they went to find homes or as sanctuary birds. Generally, if the owners weren’t around the other volunteers came to get me to deal with problem macaws they needed moved. Titan had been at the shelter for a few months when I went to get him out for one of the girls. I started spending more time with him and it was all down hill from there

One of my first pics at the shelter of the brat. 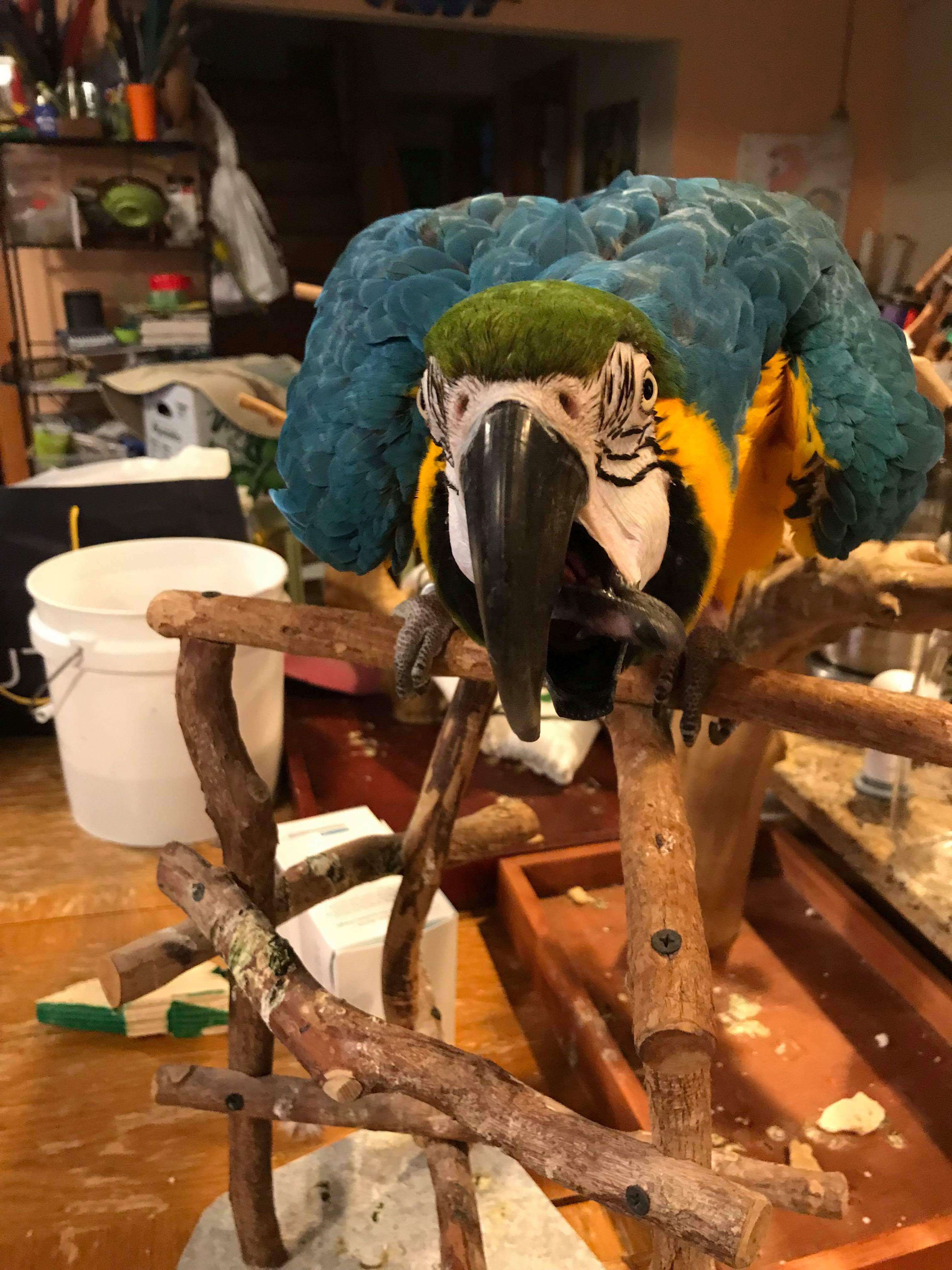 Titan! He came with the name & it fit him. Plus, it’s a solid name to yell when he’s doing something he shouldn’t be doing 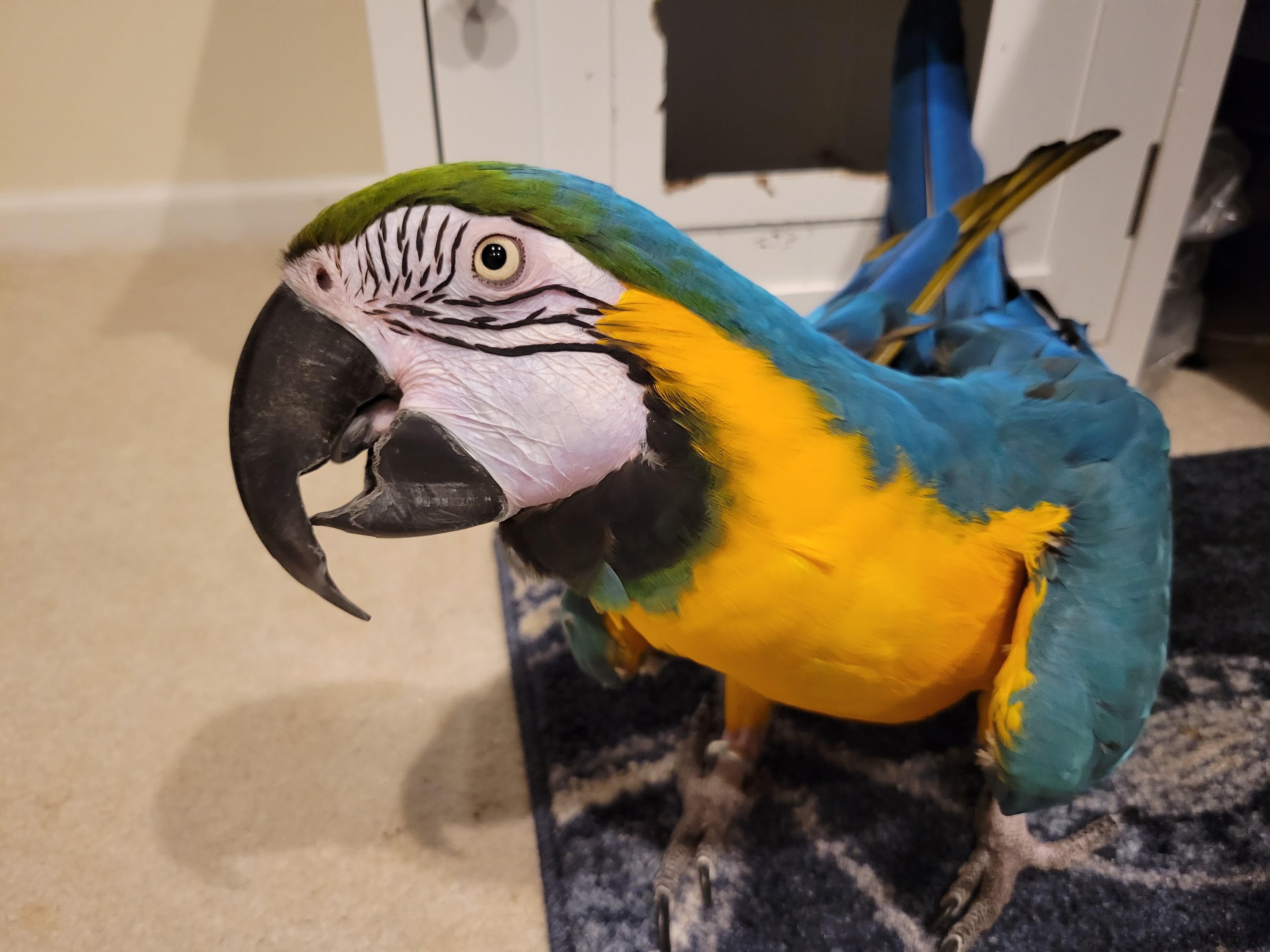 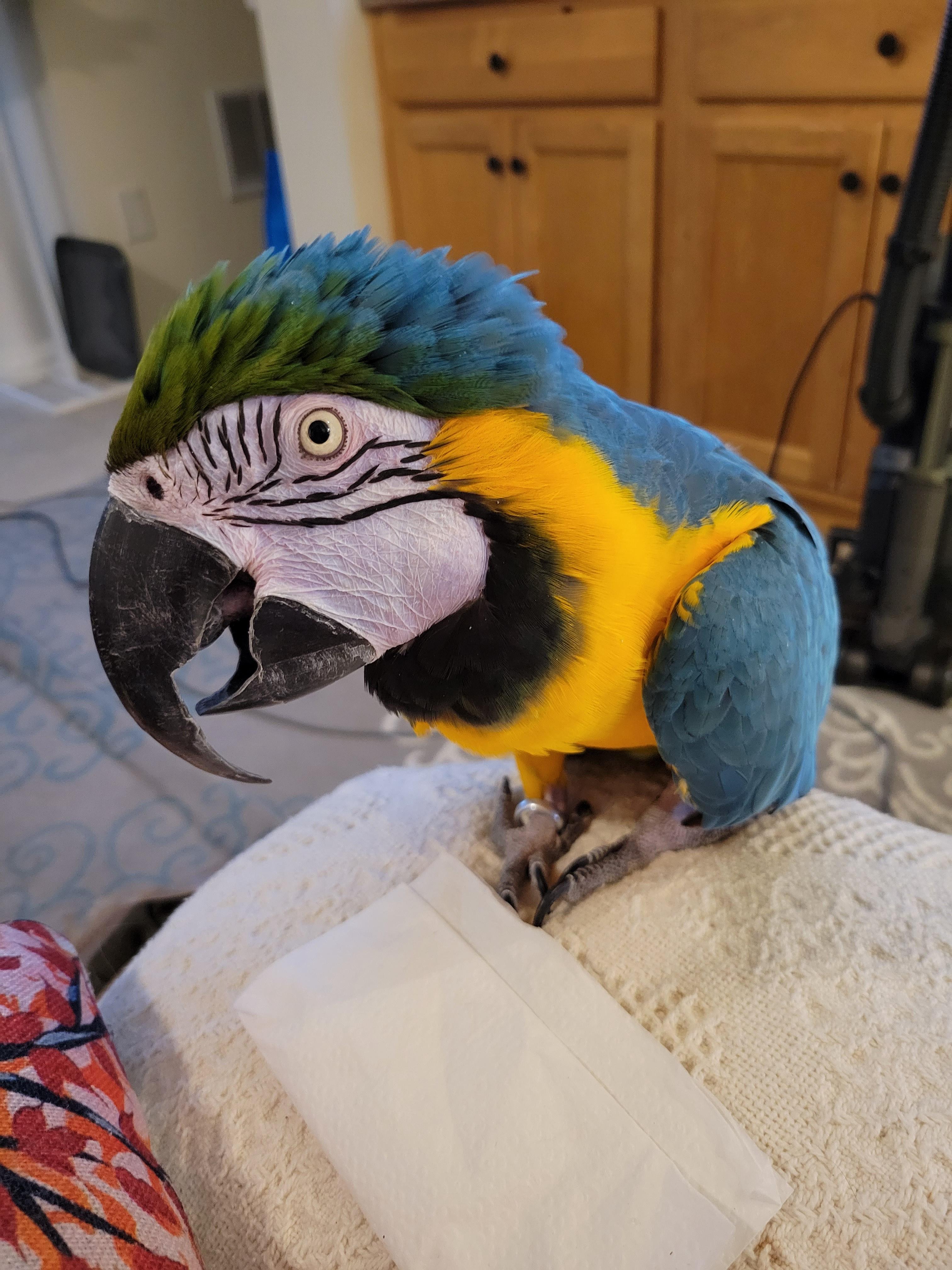 He will drop forward or backward perched on one hand to land on his back on the other. He will also drop into a bag if you hold it open below his perch. He can be held up on his side too. If you yell his name, snap fingers & point to where he should be sitting he will waddle back to his area. Mumbling & whining the whole way but he will slink back to where’s supposed to be playing. 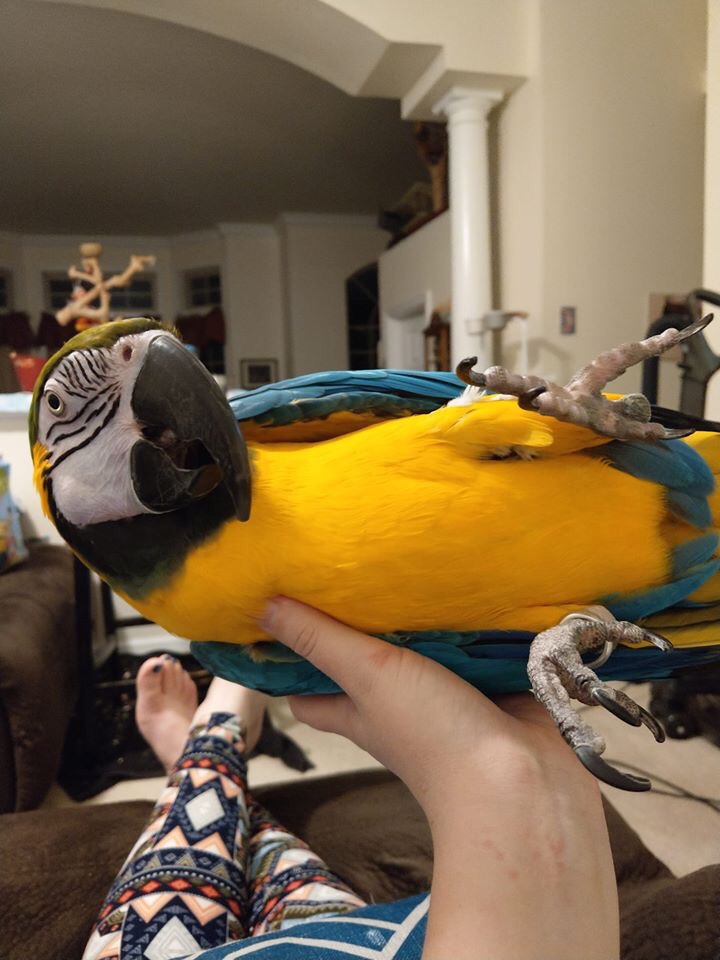 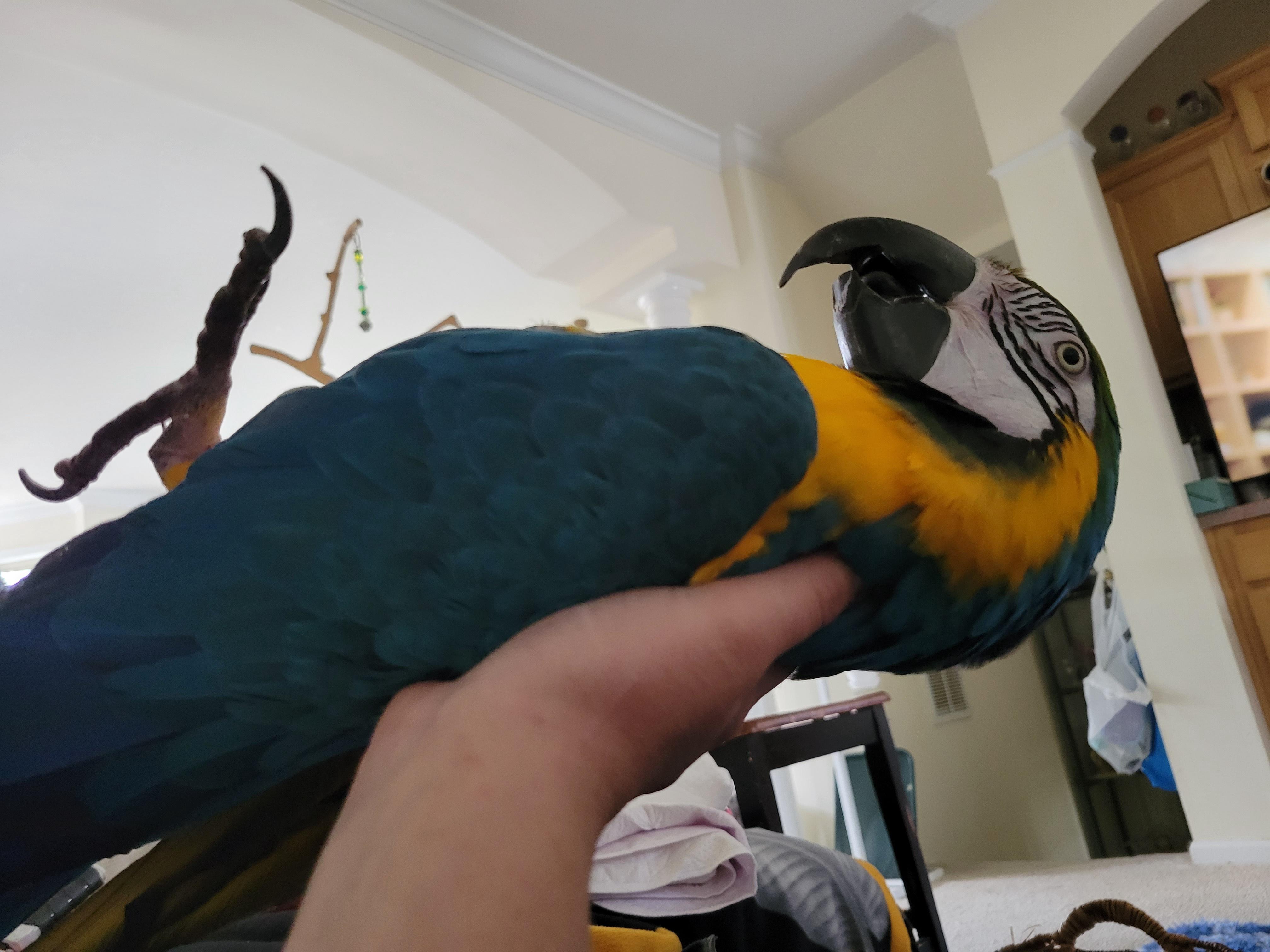 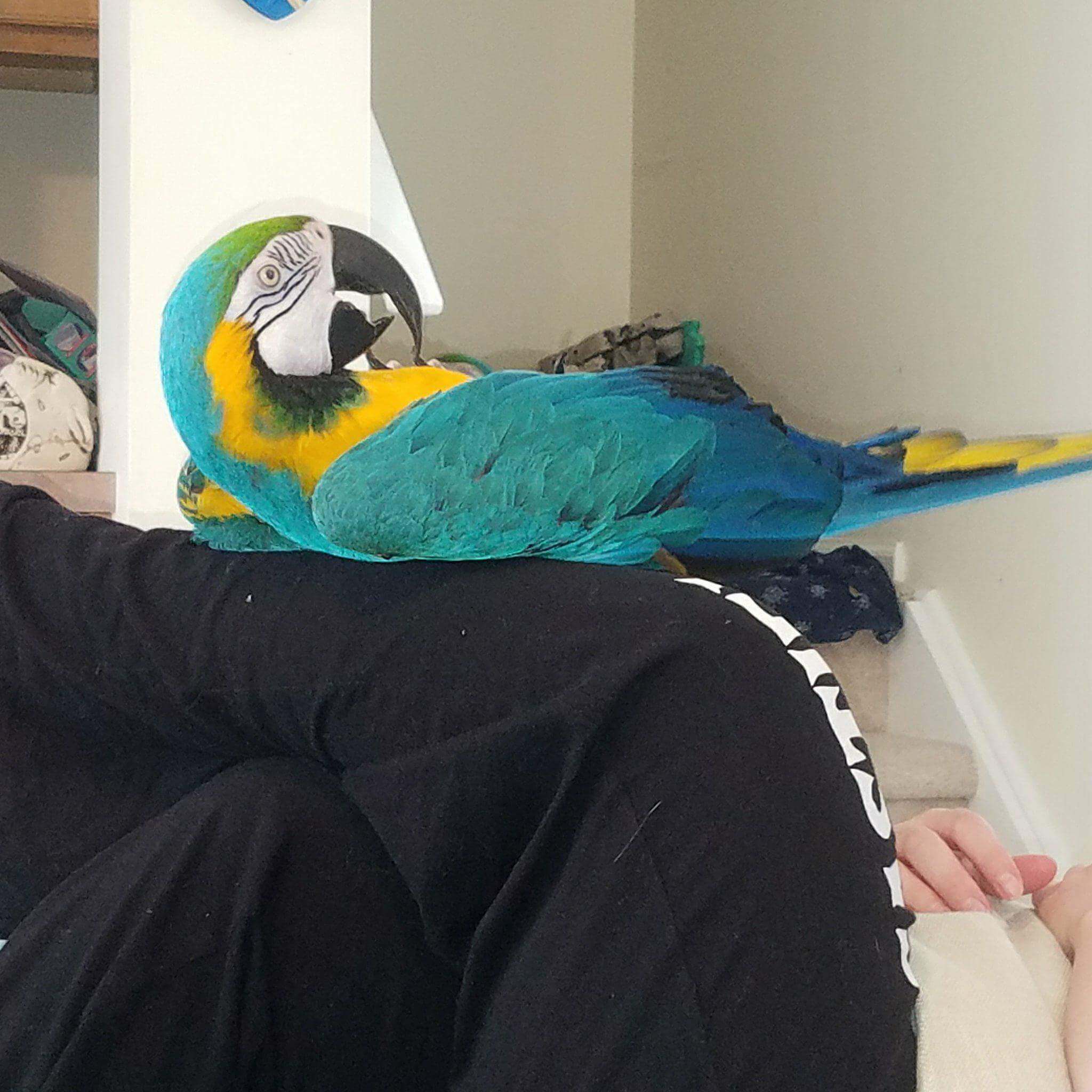 Banana Chips & Walnuts tend towards the favorites. He also likes to steal cheese or noodles whenever he realizes I’m eating it. He weirdly likes the pretty bird pellets daily select too. He will jump in the 20lb bag & dig around all excited when a new bag arrives.

Probably the tongue thing. He knows everyone finds it amusing, so he does it all the time. Like a toddler that found the get out of jail free card…

He loves to bang metal bowls around, drop them on the floor & laugh about the noise. He doesn’t have metal toys in his cage for this reason.

He also loves to throw soft sided baby cube toys around like a game of fetch, which I always find amusing to watch because he hits himself in the face with it all the time. 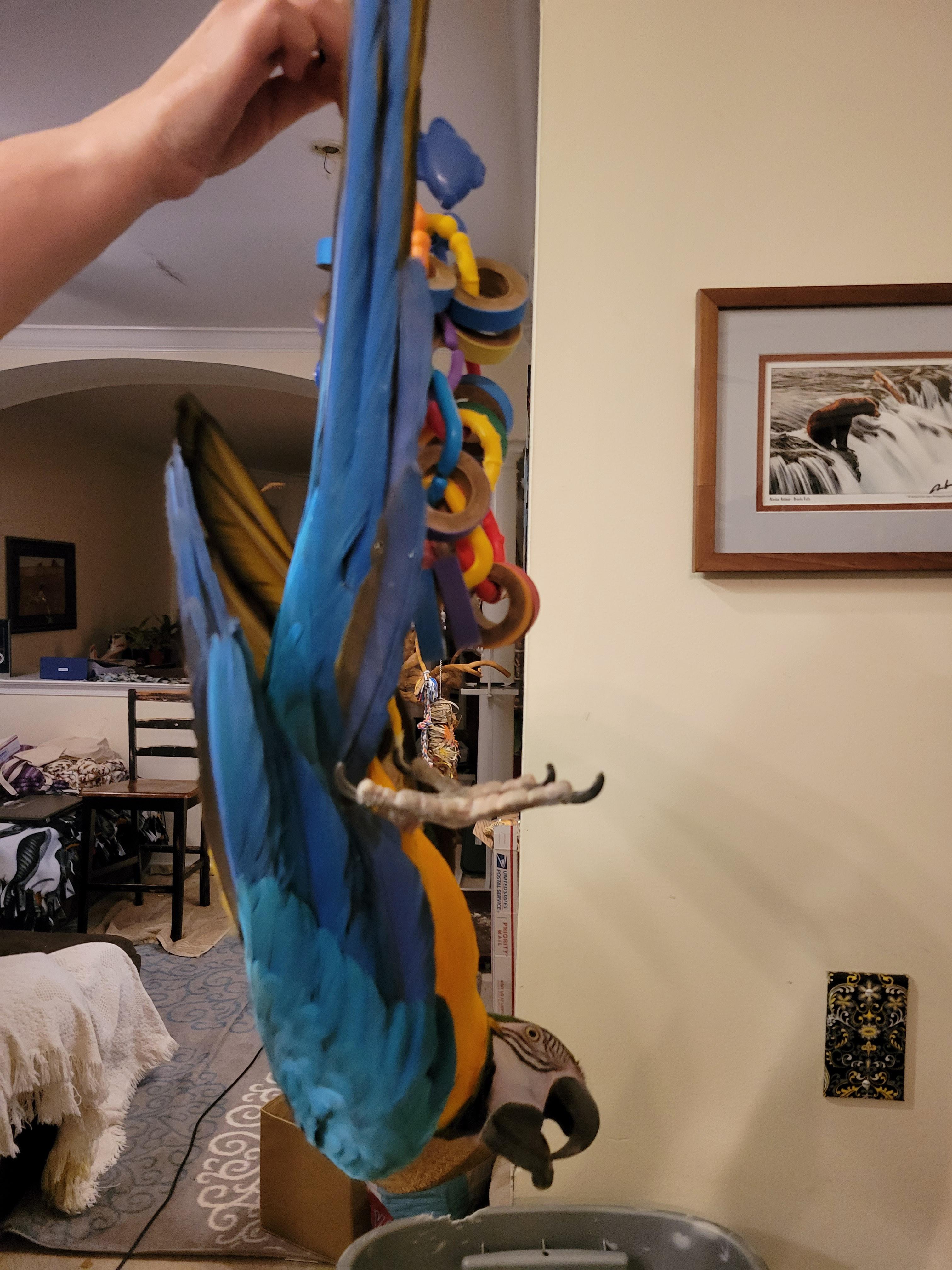 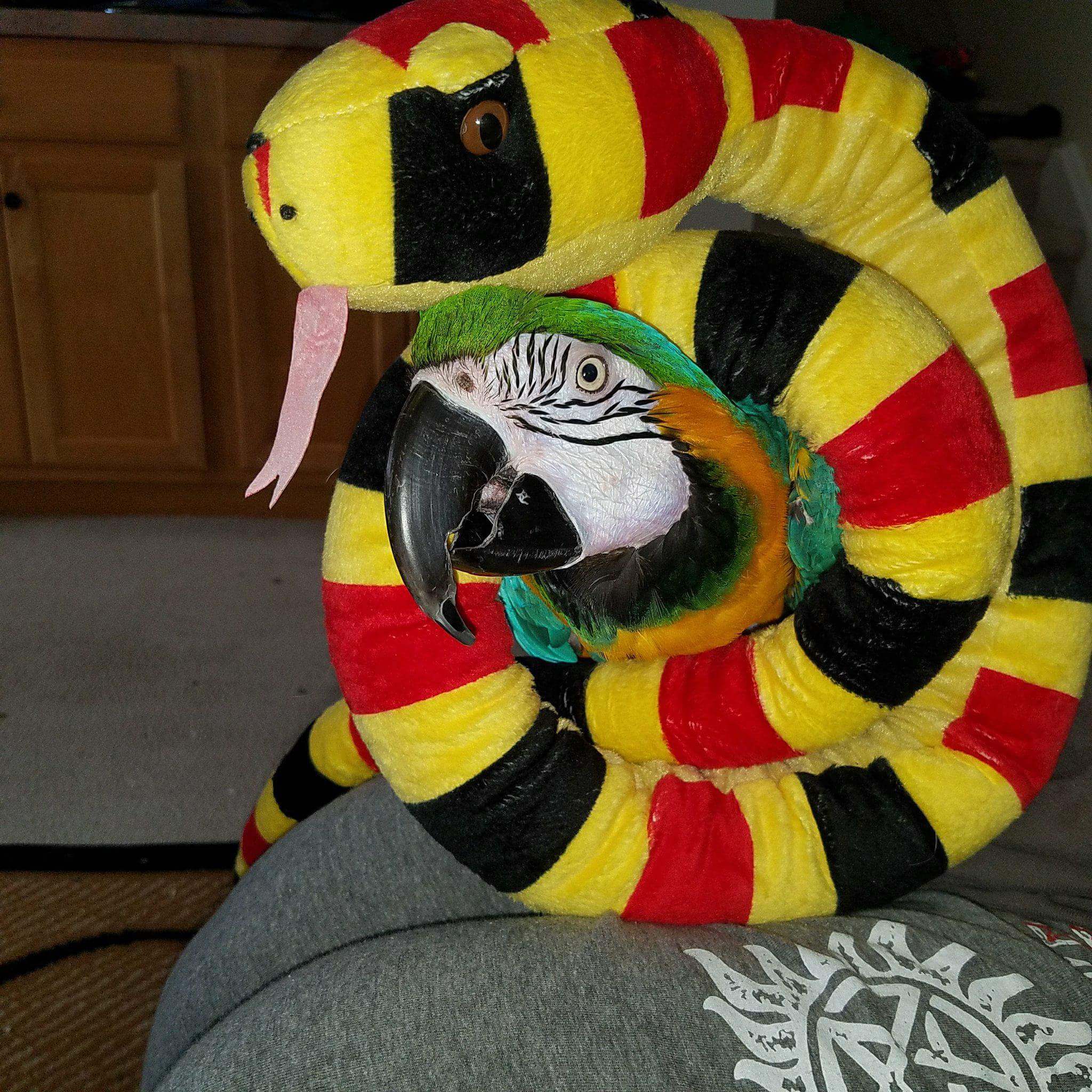 Laughter. He’s the clown of the house & always has people amused. 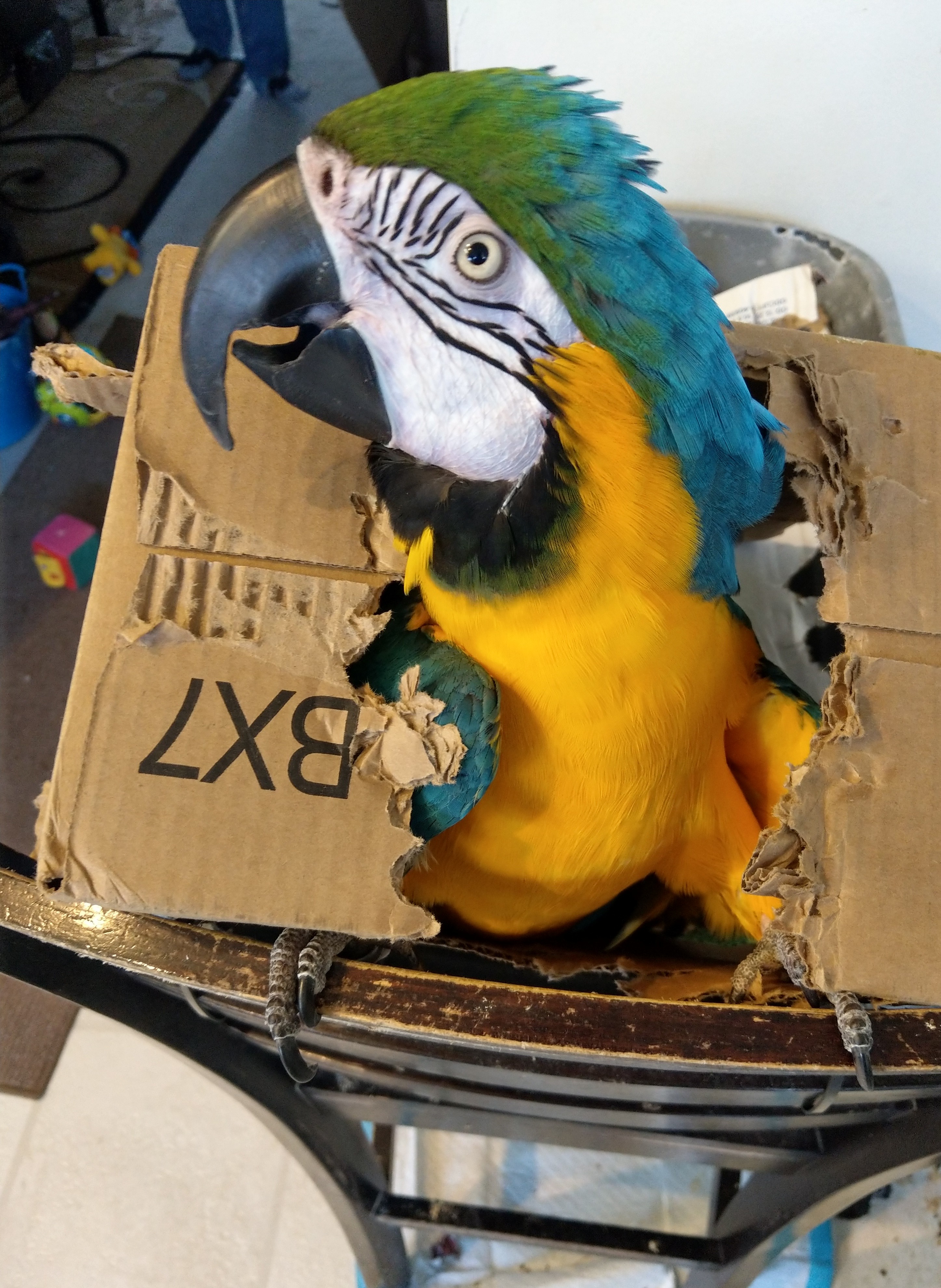 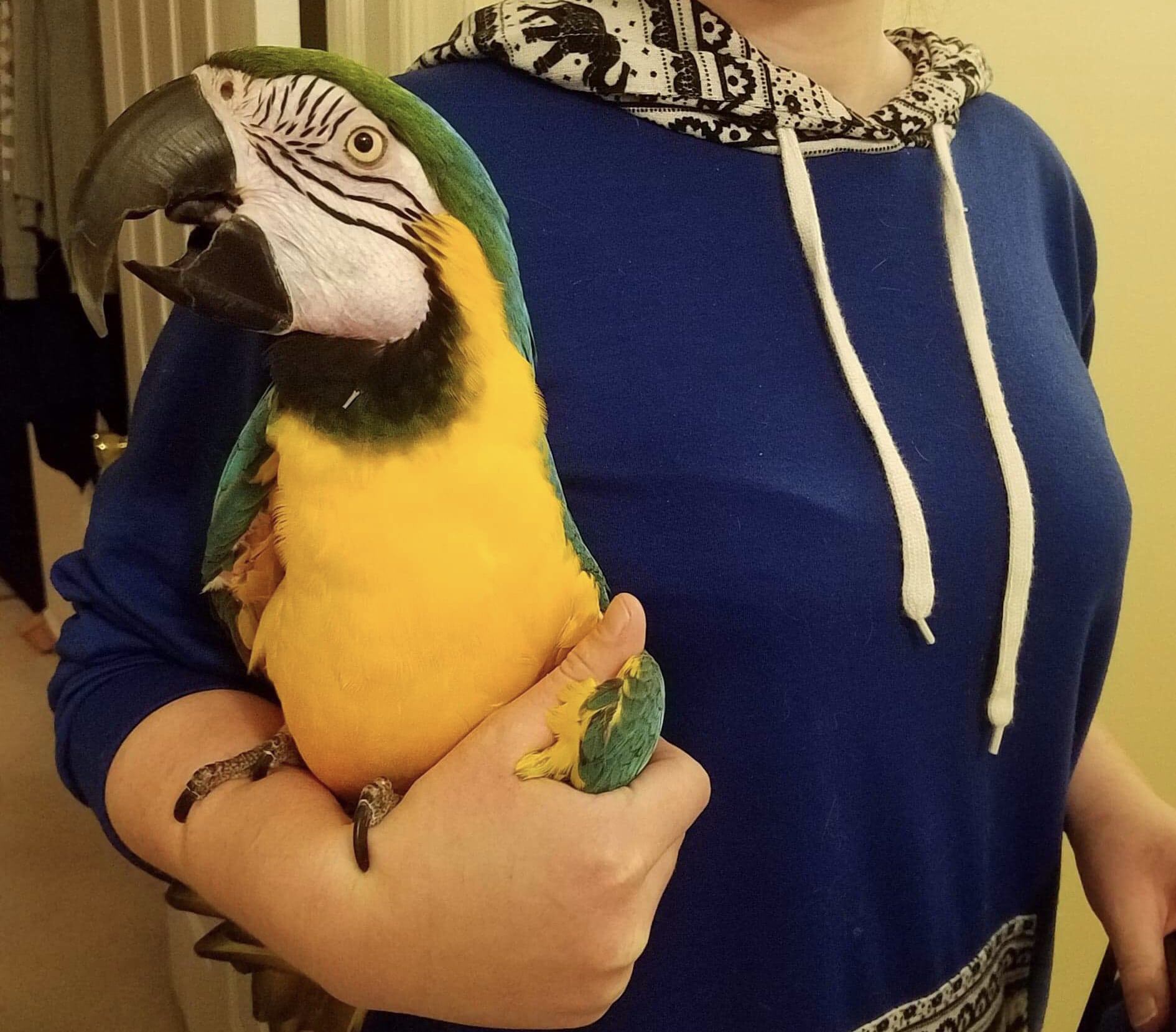 They are bullies but most of the time it’s just a bluff. If they know they can boss you around they will but if you don’t back down they will cooperate even if it’s unhappily

I would get volunteer experience at a shelter if you can. 100 problem macaws to deal with & you get good at reading & interacting with them quickly. If you don’t have a shelter ask around the local groups. There’s a chance someone is out there that can help you with learning about them. I’ve done it before for a local women that inherited a cage bound macaw. Within about a month he went from unmanageable to out all the time & bonding with the new owners.

Titan plays in his box mostly or watches the rabbits & will follow me from room to room. But he isn’t too crazy & self entertains just fine. He can’t fly since he has a bum wing so he just waddles around. He isn’t a noisy bird. You wouldn’t even know he was in the house when caged upstairs in his room. If he’s been caged longer than normal he doesn’t scream but does grab something, throw it, & give it a shout/bark. Usually all you hear is the rattle/thump of the cage from whatever he threw. The only time he screams is when he’s pretty sure I’m abandoning him when I leave the room or go around the corner. He usually stops within 30 seconds when he realizes no I’m still not coming back & yes he will have to waddle his butt down the stairs after me.

He IS a HUGE whiner. He will whine about anything. Whine he’s been left. Whine the other bird stole his spot. Whine that stuff is in his bin. Whine that people are picking on him. He barks at people & does the big wing bird thing & when they don’t back down he immediately flees straight to me like the wimp he is whining about how mean everyone is the whole way.

The tongue thing. He sticks it out all the time like a big weirdo. He does this weird sniffing thing then does whispering kissing noises in quick succession…like a creep . He does the cockatoo head rolling too but I’m not sure if that’s because he was around a cockatoo or he’s just weird. He loves boxes… complete obsession. And it doesn’t even have to be dark or big enough to really sit in.

Oh also he LOVES the rats. They don’t interact obviously but when I have them in traveling bins he has to go up to the side & make kissing noises at them. Then, he panics when I take them away.

10. If your bird talks, what is the most surprising word or sentence it has said?

He doesn’t really talk. Just Hello mostly. He has other words & phrases but he doesn’t use them much.

The Banana Chips since he doesn’t get them as often. Or any food he can swipe from my plate really. 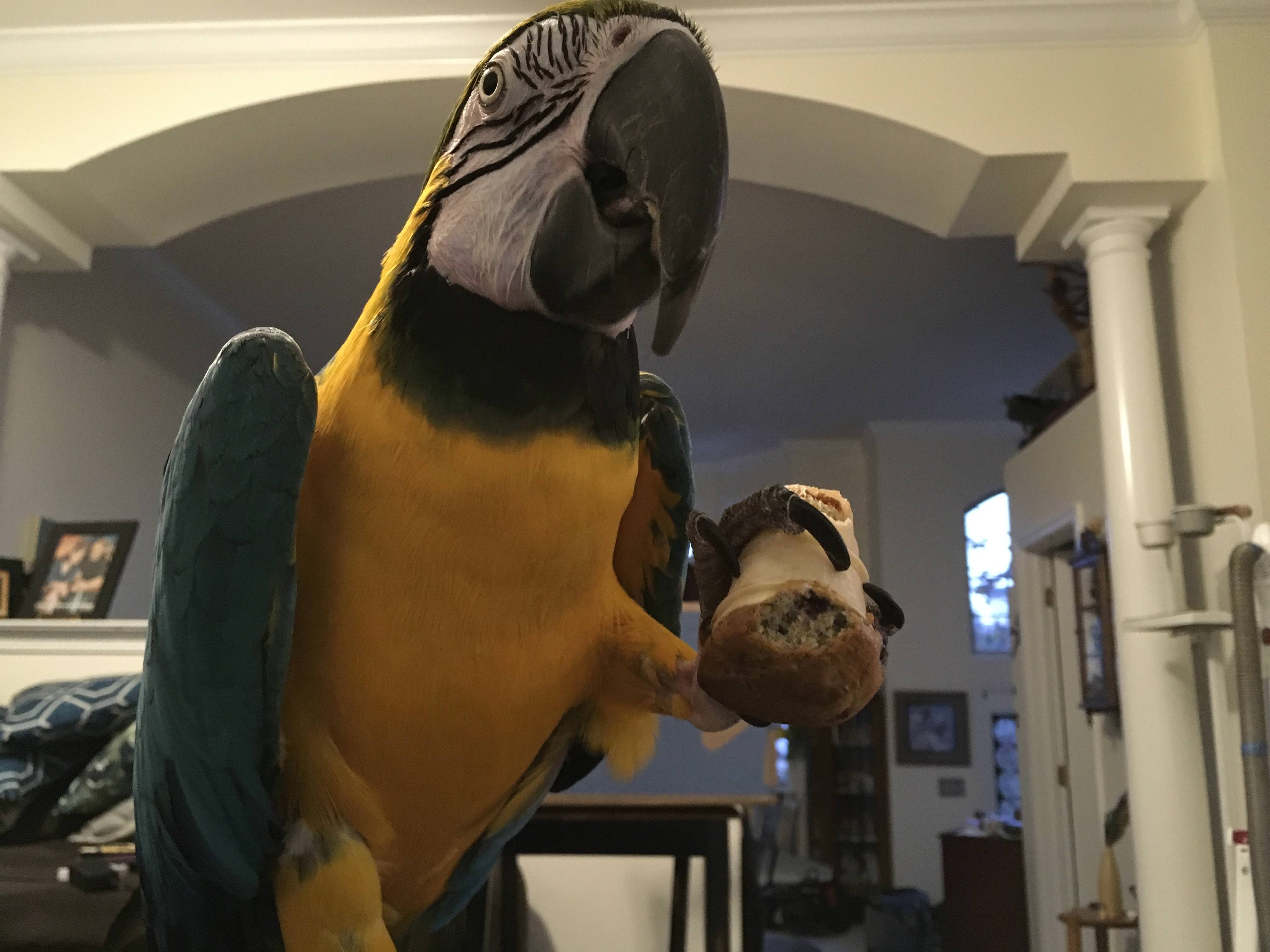 Congratulations! Titan is beautiful, I love the video of him throwing the toy. Thanks for sharing.

The picture of him coiled in the toy snake made me chuckle, Titan is clearly a cheeky dude.

I loved reading more about Titan and his quirks

I loved reading your interview, and what wonderful photos! 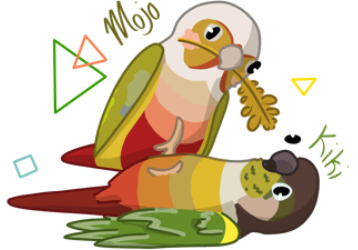 Congratulations! Titan is so handsome! I loved the interview.

Loved the interview.... glad you're back here.
There is a great deal of wisdom available here on AA from experienced bird owners. They have helped me to understand that even a "clueless" soul can muddle through with the right amount of guidance. 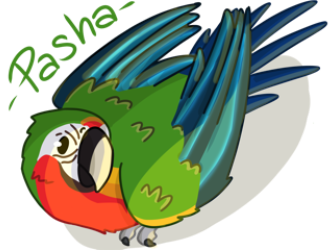 Congrats on that beauty.

Congratulations Titan! Blue and gold macaws are some of the most stunning birds out there, in my opinion.

what a beautiful birdie who looks very well loved!

What a gorgeous baby!