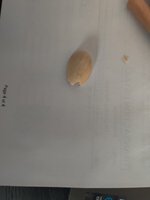 I fed my Amazon a pistachio this morning and later I found him bitting the shell. At first I thought he was just playing but later I did not see him drop the shell piecies... So I immediately took the shell away and took that photo. I am worried about the piece of the shape of a knife... If you can tell from the pic. Will the shell cut his gut inside...? Should I close watch him Incase emergency may happen?

My name is obvious.

I'm tagging a couple of members that might know an answer for you.
There is a great deal of wisdom available here on AA from experienced bird owners. They have helped me to understand that even a "clueless" soul can muddle through with the right amount of guidance.

Anything is possible. While I've heard of a very few cases where a bird eats something inedible and damages their crop...its not common. If I found that on the floor of my amazon cage, I would think nothing of it. Many parrots like to chew on nut shells and may eat a few small bits of it. Some birds will eat enough to cause an impaction or problem, but most just chew it up into little pieces and it hits the floor. The small amount consumed isn't usually a problem. Watch his poops for the next day or two and make sure their is a green fecal portion that is well formed. That will tell you that food is moving though his gut okay.

Daffy
+Frisbee and Fury Harris's Hawks Baxter Springer Spaniel Evie Sheltie Gilbert the Dachshund Maya the cat
In the end we will conserve only what we love. We will love only what we understand. We will understand only what we are taught.-Baba Douim, Senegal
You must log in or register to reply here.